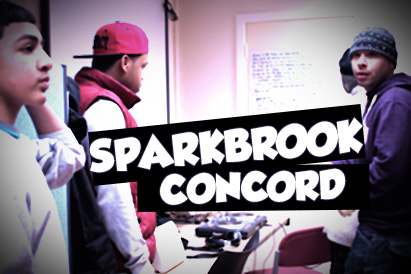 After 2 weeks of promotion and walking the streets to meet young people and tell them about the JUST B.E project, Supatrax worked a number of young people that came to the Concorrd Youth Session for the project. Morgan, Tee and Vader from Supatrax did some DJ workshops with them and we saw what the people had to offer on the mic as there were alot of rappers and MCs. We brainstormed the Sparkbrook area and looked at the good, the bad, the young people's aspirations and issues of the area. We then made lyrics based on the brainstorms we had discussed.

While some choose to create the rhymes, others focused on plaining music and other wanted to video parts of the session or do some photography. Supatrax did some 'Joiners' - This is when you take lots of smaller photos to make 1 main photos. You join up all the smaller photos to make the main large photo which has a crazy looking effect. We did this of some of the main buildings in the area. (See photogallery below).

The young people created a HOT 16 bars (16 lines of good rap). Some of the lyrics and words may not make sense to some people - as someone asked: "Why are they fighting over cheese!!???" - So below is a translation to the meaning and background to the lyrics produced. The chorus for the track was also created at Sparkbrook.

Back in 0 8 there was race gangs

Now we're working together, we're all on the same plan
Ain't trying to live like a wasteman
So I'm up in Concord - every day, fam!

Thinking of ways to make B111 better

Leave all the bad talk, the knives and the berettas
Fighting over cheddar, man dying over tenners
I remember chilling in the park . . . No pressures

Life's so precious when you're living in the hood
Citizen Khan has got so misunderstood
Back in the day people thought it was all good
But we wasn't living life, the way that we should

I don't like seeing my people doing crime, getting time
Seems like my efforts, getting put to the side
So I keep saying my prayers, gaining inspiration
Wid my people in Sparkbrook from all different nations.

I'm from East Birmingham
When it comes to papers – I'm earning em
As for all my haters - Not concerned with em
All the man's heads - I be turning em , turning em

In 2008 there were lots of gangs based on member's race

Now these gangs no longer exist and people work together on the area.

We don't want to hang around doing nothing

We often discuss how we could make the area better.

Guns, knives and acting bad is not the answer and people should steer clear of it.

People often fight or argue over weed (Ganja) and people are dying over as little as £10.

Life was different in 2008; we could relax at the park with no pressures.

But know we can reflect and see it wasn't a good position for the community.

And keep together as a community with all different races, religions and cultures in Sparkbrook.