The UK's first Youth Crime Commissioner has resigned following the Daily Mail printing some of her racist, homophobic tweets that she posted from her personal Twitter account. People try defend her but we say BUN DAT!!!!

The Youth Crime Commissioner post was set up by the Police in Kent to bridge the divide between the Police and Young People. To the shock of most of the nation the newly elected postholder, Paris Brown, has acted in a way Paris Hilton would have been ashamed off, rather than acting like Gordon Brown in her recent past before taking the £15,000 a year post.

Paris Brown presented her self as a level headed, confident young person in her recent interviews around the launch of the new post and raised questions of whether she could actually engage and represent young people - or whether she was too 'up her herself'. Well now it's been revealed that the things she 'puts up about herself' are not nice!

Some of the things she talks about are just general things that yutes are on up and down da country . . . Nuff yutes drink, bun weed or go parties - It's not right, but it's happening! But them yutes are not putting themselves in the limelight and holding positions of trust and speaking on behalf of others. 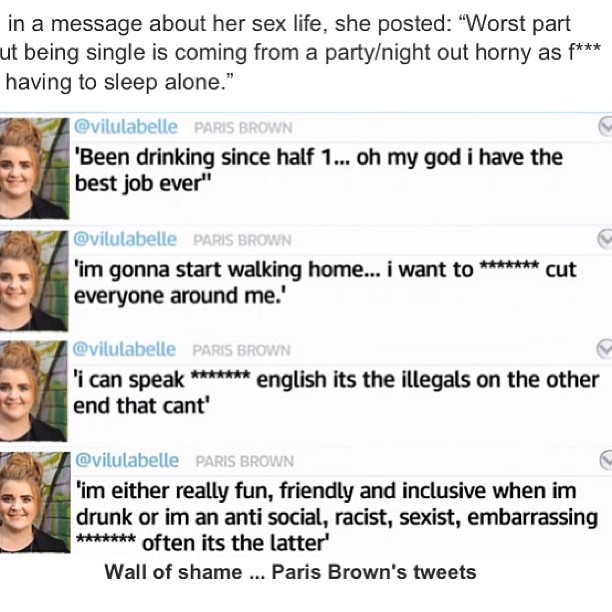 [Taken from the Daily Mail:]

Another says: 'Been drinking since half 1 and riding baby walkers down the hall at work oh my god i have the best job ever haha!!' And in one vile message, she says: 'i want to f****** cut everyone around me.'

Elsewhere she rails against gays as 'fags', immigrants as 'illegals' and travellers as 'pikeys', while admitting she has 'a thing for older men' – an apparent reference to a teacher at her former school.

Just two months ago, Miss Brown wrote: 'F****** hell why are the people from Direct Pizza so difficult to talk too!! IT IS CALLED ENGLISH. LEARN IT.'

And she attacked the male actors in the reality show Made In Chelsea, writing: 'Everyone on Made in Chelsea looks like a f****** fag.' [END]

It's disappointing that people across the country have come out to defend her actions. Guardian news paper journalist Joanna Moorhead writes a piece that says people should have supported her after her  'stupid messages on Twitter' rather than jumping on her. She goes on to say:

"The world of adults, if it's going to interface properly with the world of 21st-century teens, is going to have to grow up a bit. When we were kids our stupid, thoughtless transgressions were committed in a space that was here today and gone tomorrow. That's not how it is for people like Brown and my daughters: what they do can stain their record forever."

Supatrax says: The age of criminal responsibility in England and Wales is 10 years old, and any silly things you do as a yute, can stay on your record as a stain for the rest of their life. When CRB checks etc are done later in life for jobs etc. your silly doings an have a major impact. If someone writes racist crap on Twitter, why shouldn't they be held accountable?

With the recent announcement The British Library will form a set of "legal deposit libraries" that will carry a complete back-up of everything posted on the internet from the UK. People need to be aware that 'theses on-line gangstas and other on-line twits on Twitter, YouTube, Facebook etc may be digging a grave for themselves in later life . . . "Your on-life social life, will affect your later life".

Paris Brown should not have had the oppourtunity to resign - She should have been sacked!