The role of the 'Baby Father'.

There’s just no escaping it these days, it’s in the films we watch, the music we listen too. Magazine columns and feminist novels have dedicated endless amounts of pages to the whole babyfather issue. The single parent epidemic is sweeping through Britain so fast they even had to coin the phrase just to specify the modern man’s role in contemporary family life. 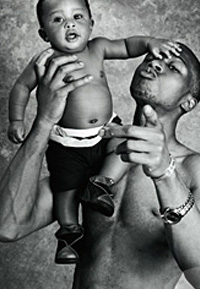 Long gone are the days where boys grew up to be a companion and a soul mate. The term husband has faded into the shadows of the past and now we're left with nothing more than the simple role of the baby father.

The term is as simplistic in its nature as it is in definition. No expertise are required to become one, a man does not earn the title upon the basis of how much time he dedicates to his children or by the measurement of quality in his parenting. Being a babyfather requires nothing more than a sense of acceptance that the child belongs to you and for some women, the battle to do that can be a failing one. Talking to young mothers today will lead you to believe that standards in male parenting skills have plummeted so low that by just doing the normal basics a man can clarify as a good father.

For many women, their definition of a good father is one that has a job, provides a regular source of income to help with the upbringing of his child, isn't out sexing other women and hasn't served a stretch in prison. Whilst we should all applaud these type of fathers, it can not go unoticed that, in other cultures, these same qualities are considered the minimal expectation of any man who brings a child into the world. Trouble is, as long as our expectations of fathers remain so low our desires to elevate ourselves as people shall remain grounded.

Whilst its easy to point the finger at the wookless baby father and blame the struggles of raising children on them, more thought should be given into how our cultural ideology has fallen from grace over time. As much as women will lead you to believe that “men are getting worse these days” and “theres no longer any good man out there,” these same problems have been present in the black community for many generations. Huey Newton was scribbling the same desires for the Black man to elevate themselves as parents in the Black Panther manifesto as far back as the late sixties and before him, Malcolm X went as far to encorporate parenting classes for members of the Nation of Islam. The babyfather drama is not just one that plights the Black community - many young men now a days plan to be a babyfather! 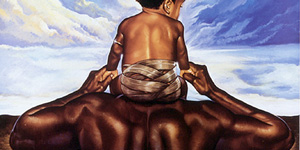 For some people it is merely a case of the apple dont fall far from the tree. Present expectations of fathers in the modern community are so low because they stem back from a persons own experiences with their father. How can we expect a person to fully understand the importance of parenting when their beliefs and ideals have been shaped by thier experiences with their own parents which may have been severed or in some cases even, non-existent. Until more men break the barriers of racial stereotype by elevating themselves as parents we shall remain gridlocked in a never ending cycle. By dedicating ourselves as good strong parents today - we are laying strong foundations for our children to build on in the future.

It's no secret many women have justified reason to complain about their babyfathers but at the same time my ears have grew tired of listening to the same old rants about how “all men cheat”, “too much man are running road and ignoring their  responsoblities.” Whilst I sympatise with their circumstances, I remain a big beleiver in the phrase, "If u lay down with dog, don't be shocked if u catch fleas." Alot of babymothers seem to possess this assumption that they can have children for men who're in constant run-ins with the law, make a living through crime and are associated with gangs and everything will turn out fine. Then soon after they complain that their babyfathers aren't spending enough time with the chilren, aren't helping them out financially, or spending too much time running road like they didn't know that's how the dude got down in the first place . . . like they didn't no 'gangsters don't usually make the best father material'.