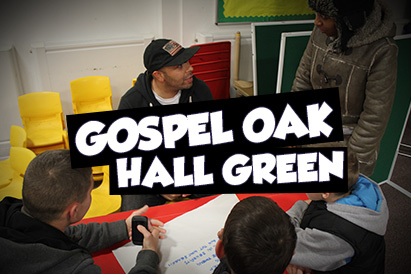 Supatrax spent 2 weeks walking the streets of Hall Green's Gospel Oak area and the Pitmaston housing estate telling people about the JUST B.E project. We met a group of young lads who let hear some of their lyrics - They were disgusting . . . The lyrics were all about people's Mom's, shanking and other sillyness. We told them to come to the JUST B.E project and work with Vader to look at some better lyrics and get practising on how to MC to some hard grime tracks.

Supatrax worrked with a youth group based in the Gospel Oak Church Hall that meet every Thursday. The group is co-ordinated by  Gospel Oak Church and a youth group called Alkhami. Supatrax worked with the group to clean up their lyrics and also look at what they thought of the the other areas of Birmingham East. The guys from Gospel Oak were 'ON IT!' they were DJ'ing / MC'ing and worked with Vades to get a their lyrics down quick! There were a few guys who had lyrics already, so we looked at these and helped tailor them and teach them about the delivery of the lyrics. 2 guys even got a little clash on to see who the best was . . . . But Vades stepped in and showed them who the best was! LOL!

The lads in the area refer to the area as AG (Acocks Green) as it's close tor the border with Hall Green. We discussed that there wasn't much to do in the area, so beacuse of this they get bored and mess about for chases. The Hall Green Ward Councillor Barry Bowles came down and spoke to the young people about what they want in the area. He thought the project was just what the young people needed. They told him what they thought of the area and he took their views on board and told them so of the plans for the area. Below are AG's 16:

We need more OP's in AG

Cus it's all going off in AG!

But we'd rather jobs that pay £P

Then we can buy - anything!
But curfews won't help – Cus timing is everything
No time for relying on benefits
Cus in the long run – That won't benefit

We always seem to get provoked
So the taxi men get smashed with yolk
If we try, we can make it big with one note
Things have gotta change or we'll end up broke

I'm from East Birmingham
When it comes to papers – I'm earning em
As for all my haters - Not concerned with em
All the man's heads - I be turning em , turning em

We need more oppourtunities in Acocks Green.
Because there is nothing but trouble in Acocks Green.
All we do now is ride Quad Bikes in JC park.
But we would rather have jobs that can make us money.

With a job we would be able to buy what we want and need.
But getting Police curfews don't help us, as we need to able to do jobs of an evening.
We do not want to rely on Government hand outs
Because in the long run that will not lead to any fulfilling career prospects.

We would rather go to the Gospel Oak youth club
Then drinking alchol on a Friday evening and smoking weed.
We alway get Police chases and stopped by the Police - even when we are doing nothing.
But things like this happen as we've got nothing better to do and we can't see anything that is going to change in the area.

The Police and local people always seem to move us on and moan at us even though we are doing nothing.
So to give us something to do and have a bit of fun, we throw eggs at taxi cars for a chase.
With a little oppurtunity we can make a success of ourselves.
We need to make a change to ourselves and the area or we will be destined for failure.